London (CNN) – The mantra of politicians who want Britain to leave the European Union has always been “take back control.”

As Westminster prepares itself for a third consecutive night of Brexit drama, the question is now: Who is in control?
It’s certainly not Theresa May. On Wednesday, she suffered another humiliating defeat, with members of her own Cabinet refusing to support the government’s position in a crucial vote on the issue of a no-deal Brexit.
On Thursday, lawmakers will vote on whether to delay the UK’s departure from the European Union beyond March 29. Many see that delay as an opportunity to push for a “soft” Brexit, with the UK maintaining strong links to the EU.
Lawmakers will vote on a motion, put forward by the government, which suggests delaying Brexit for a short period — until the end of June at the latest.
Yet this is contentious for two reasons: First, many pro-Brexit lawmakers don’t want any delay beyond the original date of March 29 and would rather Britain left without a deal. Second, Members of Parliament either sympathetic to a softer Brexit or to remaining in the EU are unhappy that the delay is conditional on the House of Commons voting for May’s Brexit deal, which has already been rejected twice.
This condition was not mentioned by the Prime Minster when she agreed to the possibility of a delay to Brexit two weeks ago — and so her opponents are furious. Lawmakers will on Thursday try to strip out that condition and vote for a delay in any circumstances. 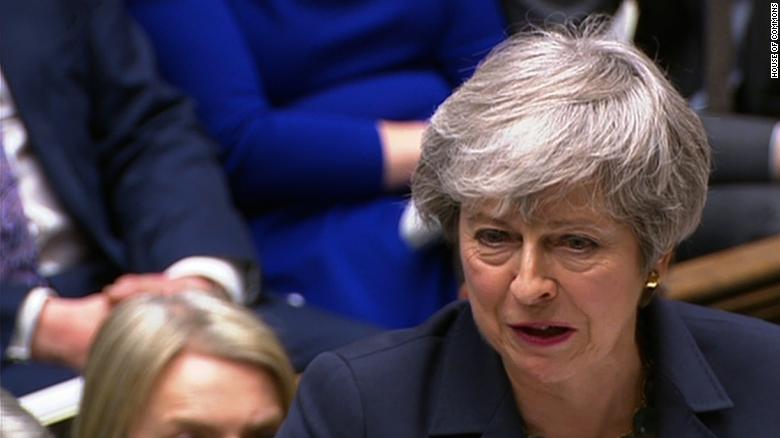 Wednesday’s vote, carried by 321 to 278, doesn’t change the default legal position, which is that without deal, or unless the EU agrees to delay Brexit, Britain crashes out of the 28 state bloc in just over two weeks.

May is running out of options to seize back control of the Brexit process. In the House of Commons on Wednesday night, she made it clear that she would bring her twice-rejected deal back for a third time next week.
But after two nights of voting against the government, Conservative MPs have acquired the taste for rebellion. Government discipline and party loyalties have broken down.
The idea of a no-deal Brexit is clearly opposed by Parliament — and while no deal remains the legal default scenario if a plan is not approved by the time the UK leaves, Wednesday’s vote has given May’s critics new impetus to try to get the Brexit plan they want.
Crucially, many on all sides see the prospect of a three-month delay as an opportunity to change the course of Brexit completely. If Parliament is granted more time, it could finally reach a consensus on a softer Brexit.
So, alongside the main motion Thursday evening, there will be a series of amendments which could point to a way out of the Brexit stalemate.
These could include asking Brussels to consider renegotiating the current Brexit, given Parliament’s reluctance to support it. 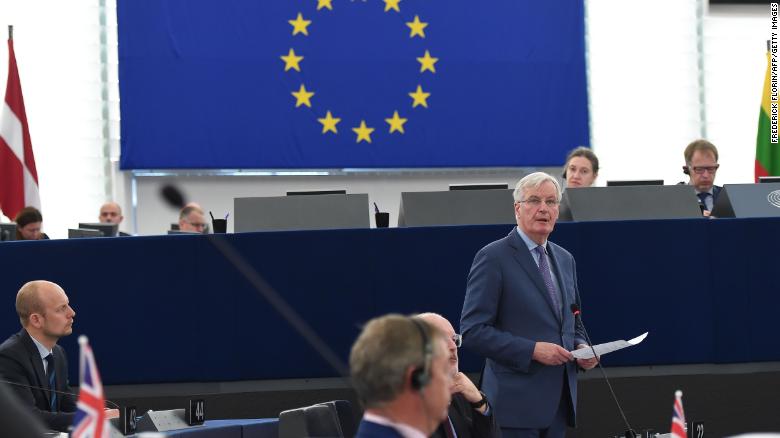 EU chief Brexit negotiator Michel Barnier (R) told Members of the European Parliament on Wednesday that the ball was firmly in London’s court.

While EU chiefs have repeatedly ruled out reopening the withdrawal agreement, they may start to feel the pressure to do so.
EU chief Brexit negotiator Michel Barnier told Members of the European Parliament on Wednesday that the ball was firmly in London’s court.
“It is UK’s responsibility to tell us what they want for our future relations. That is the question that needs to be posed to which we expect an answer. It will be a priority even before the question of an extension. Negotiations on Article 50 are finished,” he said.
To pave the way for renegotiation, lawmakers could hold a series of indicative votes — which would not be legally binding but would show the EU what sort of deal would get the broadest support and make Brexit happen by consensus.
These options could include keeping Britain in a form of customs union with the EU — which supporters say would be better for the UK economy, currently faltering at the prospect of no deal — or striking a new partnership between the UK and EU similar to that shared by Norway and Brussels.
MPs could also vote on whether the country should hold a second referendum, although this plan is unlikely to pass in House of Commons.
After months of the Prime Minister refusing to open up the Brexit process to MPs, and forcing them to either back her deal or face a no deal, suddenly Brexit is wide open and everything is in a state of flux.
Ordinary lawmakers have seized control of Brexit from May.

Not only does it look like Brexit will be delayed, but the UK could be heading for a soft Brexit.